PSC filming All Together Now

One of the highlights for me last year was filming on the BBC One, Saturday evening prime viewing show, ‘All Together Now’. Part of the PSC team filming behind the scenes and filming the profile interviews. PSC,  to those who don’t  know, stands for Portable Single Camera. An ‘Americanism’ starting to be used in the broadcast world. 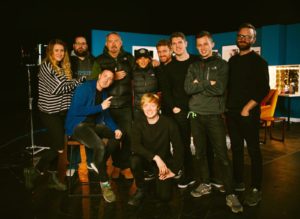 All Together Now PSC team

Filmed at Salford Keys Media City. Profile interviews were shot in the ‘Pie Factory’ an old decaying building next to the BBC studios planned to be demolished after the show. One of the coldest places I have worked!! Behind the scenes filming of the Judges ‘The 100’ was filmed in the large mezzanine area  front of the building. Very challenging as we had to battle against the low winter sun streaming in from the large glassed front of Salford Quays.

Our crew was put together by Casey Antwiss, who I have known for a few years through my work with Electric Robin. My team consisted of Carl Akkouh PD, Dionne Bromfield camera, Russ James Sound, Sam Taylor Assistant Cam, and Myself on Camera and slider. We shot on Arri Amira with Canon primes. Profile filming was done over a two week period before filming took place for the lives shows.

Hosted by comedian Rob Beckett, All Together Now is a singing competition with a twist. In each episode, a range of talented singers take to the stage eager to impress ‘The 100’ televisions biggest judging panel. Lead by Spice Girl Geri Horner, The 100 are a unique collection of one hundred singers, experts, teachers and performers from every corner of the music industry. 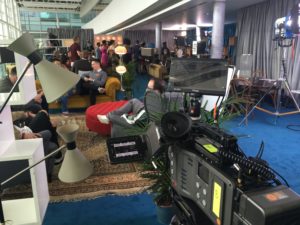