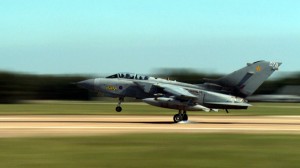 The Video Shoot went well at RAF Marham, (Norfolk) we were very lucky with the weather as it stayed dry the whole week. The shoot was based on ground service crew and pilot interviews and was interspersed with a dramatic reconstruction and various cutaways of examples of FOD, as mentioned in my previous post. This video was basically to reiterate, to all ground service crew and pilots that they have to make vigorous checks, that there are no loss object such as a nut or bolt that could fly into the Tornado’s engine and cause fatal damage.

Despite the challenges of trying to do interviews on a ‘live’ airfield, we didn’t get too many disruptions. The crew consisted of myself Lighting Cameraman, the director,  a producer(second camera) and production assistant. All the crew had to have security clearance. I used  my Sony PDW350 for this video shoot and was very pleased with the results. This will probably be my last MOD shoot for a while as the contract comes to an end this year. 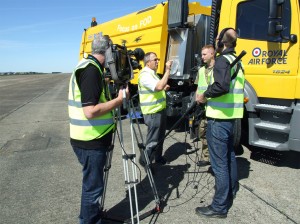 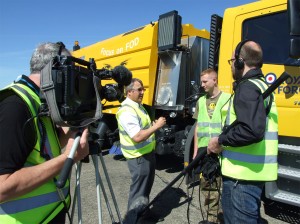 Unfortunately as this video production was made for the MOD I cannot share any links to the video, as it will be restricted. 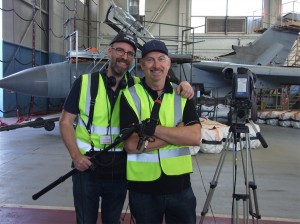 Posing with my’ long-time’ soundman Rupert inside one of the hangars.