Just before Christmas I had the privilege of filming a VT for Endemol The National Lottery Live show, which featured CHAS Robin House Hospice in Balloch, and a project which cheers up sick children across Scotland. This was broadcast on Saturday 21 December. The ‘ Clowndoctors’ , who use performing arts to brighten up the lives of children in hospitals and hospices, were shown visiting Robin House on the BBC One show at 9.50pm. The Director Kevin Batchelor, who also runs Electric Robin, once again got me to film with the Canon C300, using Prime 70-200mm and 17-55mm lenses. Kevin wanted to show a happy side, even though the subject was about terminally sick children and used ‘Christmas Lights’ by Coldplay as the soundtrack.

Run by charity Hearts and Minds, The Clowndoctors have received more than £87,000 of National Lottery funding over the last ten years to enable them to visit 17 venues in Scotland and put smiles on the faces of over 10,000 children.

Pip Quinn, Fundraising and Communications Officer at Hearts and Minds, said:  “Clowndoctors bring joy and laughter to children and hope to their families. We visit short stay patients, children who are long term ill and children who are fully dependent on care and have life-limiting illnesses.

“We are not just about magic tricks, it is therapy. We use storytelling, music and drumming to help distract children from their situations and stimulate them to help their development.

“We are really excited to be featured on the National Lottery Live Show. We wouldn’t be able to do what we do without National Lottery funding and to be recognised in this way means a lot to us as we are a small charity.” 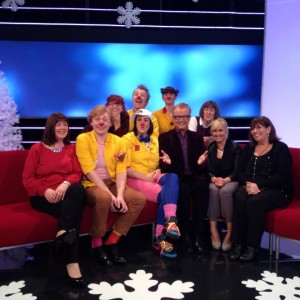