With all the football fever going around this summer with this year’s Fifa World Cup in Brazil I was involved in a commercial video shoot at the world famous George Lucas Stage at Elstree Studios, to film an advert for Doritos. The shoot was based on a penalty shoot out competition by 8 teams with three players. This was a knock out competition until two teams made the final. In the final the teams had to beat England’s Joe Hart.

The Shoot was organized by Endemol using Electric Robin to produce the video. This was probably one of the biggest shoots that I have been involved in with with over 50 people in the camera crew alone including Jib operators, steadycam, sound and lighting. I filmed on the Canon C300 and my task was to focus on the goalkeeper and you will see that my shot was used a few times in the final video. 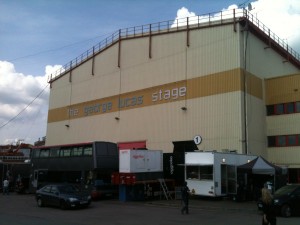 The Shoot out brought teams of mates from across the country for the ultimate test of their penalty spot skills – but to make sure the pressure didn’t get too much, teams had have help from the legendary Mariachi Doritos.  Bringing their own Mexican flavour to the game, the band dished up a host of distractions t the keeper had to face as he attempts to save each shot. 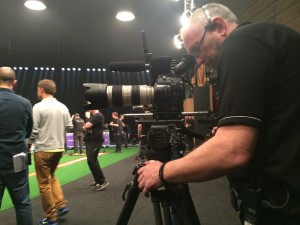 Yours truly operating the Canon C300

Joe Hart, who  faced the two final teams in the ultimate Mexican style showdown, said: “I’m really excited to be working on the Doritos Penalty Shootout, it’s a great opportunity to get your mates together and throw your sombrero into the ring if you think you can put one past me. You might have the Mariachi Doritos on your side but be warned, I’ve been practising” 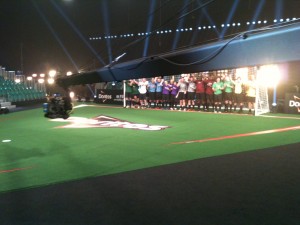 The Teams line up before the penalty shoot out

The two teams that reached the final  stared alongside Hart in the new Doritos TV commercial, which  aired across the UK on 24th May.  The winning team that scored the most goals  also received the ‘Ultimate Mates Football Trip’, traveling by private jet to some of Europe’s most exciting cities, receiving VIP treatment at exclusive clubs and hotels.